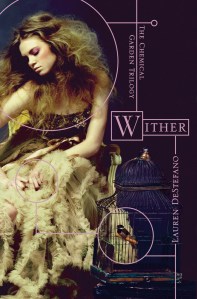 “In our brave new future, DNA engineering has resulted in a terrible genetic flaw. Women die at the age of 20, men at 25. Young girls are being abducted and forced to breed in a desperate attempt to keep humanity ahead of the disease that threatens to eradicate it. 16-year-old Rhine is kidnapped and sold as a bride to Linden, a rich young man with a dying wife. Even though he is kind to her, Rhine is desperate to escape her gilded cage – and Linden’s cruel father. With the help of Gabriel, a servant she is growing dangerously attracted to, Rhine attempts to break free, in what little time she has left.”

A fast paced dystopian novel with a familiar story that has just enough variation from the plethora of apocalyptic fiction out there to recommend itself, although is clearly very derivative. There are a fair few plot and logic issues and some rather unsubtle characterisations but it is somehow very readable regardless. The real strength for me was DeStefano’s descriptions of the world as it is as she ably conjures up a world where abductions and poverty sit side by side with extravagant wealth all wrapped up in a frightened and desperate (although ill defined and created) world. Ultimately, I want to read the second book which means it can only be classed as a success, despite it’s many failings. However, if DeStefano doesn’t sort her backstory and world building out and give us some more answers (I’m giving her the benefit of the doubt at this point that she has though this through but just hasn’t included it) then I’m afraid I’m out. I’ve given it three stars but it isn’t a ‘good’ book – it’s a book with huge problems that I couldn’t put down and enjoyed despite myself.

The full review is on my blog.

First Line: ‘I wait, they keep us in the dark for so long that we lose sense of our eyelids.’

One thought on “sevenstories’ #CBR4 Review #28: Wither by Lauren DeStefano”