xoxoxoe’s #CBR4 Review #16: Dressing Marilyn: How a Hollywood Icon Was Styled by William Travilla, by Andrew Hansford with Karen Homer

Dressing Marilyn: How a Hollywood Icon Was Styled by William Travilla

, by Andrew Hansford with Karen Homer, starts off with a great concept — the long-term collaboration between Hollywood icon Marilyn Monroe and her most trusted costumer, William Travilla, who was known merely as Travilla during his design career.

The book includes many images of Travilla’s original sketches for some of Marilyn’s most famous costumes — the white pleated dress she wore while standing over a subway grate in The Seven Year Itch, the pink confection she wore during the production number “Diamonds Are A Girl’s Best Friend” in Gentlemen Prefer Blondes, and many more. As many close-ups as there are of Marilyn’s dresses, the 192-page book leaves one wishing for more.

Author Andrew Hansford befriended Travilla’s business partner Bill Sarris, and now manages Travilla’s design archive. Travilla died in 1990 after a long career in Hollywood that started in the early 1940s. Hansford also organized a 2008 exhibitionfeaturing Travilla’s fabulous costumes and designs. His goal to make Travilla and his talent more widely known is an admirable one. But Hansford is not a writer. His over-long introduction takes the focus off Travilla and even Marilyn, for no apparent reason other than to share his personal fascination of traveling to Hollywood. Not helping matters are a few errors in the text and multiple typos, which seem to become more frequent as the book goes on.

Instead of a section by and about Hansford, why not include a longer, more in-depth essay on Travilla, possibly written by someone who worked with him in film or on television? Beyond the films he made with Marilyn, Travilla had a quite successful career on network television, creating costumes for The Thorn Birds, Dallas, Knots Landing, and many more. He won an Oscar in 1949 for the costumes he created for the film Adventures of Don Juan, starring Errol Flynn. There is a nice anecdote about Flynn included in the book, but sadly no images of any of the costumes, even from film stills.

Probably the most surprising missed opportunity in Dressing Marilyn is the complete absence of any biographical information about the star. Certainly there have been tons of books that have covered the actress and her movies, but it is still silly to assume that readers already know the facts of her life and career. There is a lengthy filmography included at the back of Dressing Marilyn for Travilla, but nothing for Marilyn herself, who is certainly helping sell many copies of this book.

Dressing Marilyn does include some interesting insight into how intricately constructed some of her costumes were. Travilla truly built a framework beneath the deceptively simple dresses to highlight the actress and her shape. A dress like the famous pleated gold sheath that has become one of the most iconic images of the star had interior wires structured to mold to her body, and was made from a fabric that can not be replicated today. Marilyn had a great grasp on how to promote herself, and counted on Travilla to create form-fitting dresses and gowns that would show her off to her best advantage, both on-screen and off. He even created a version in white of the pink gown from Gentlemen Prefer Blondes for her own personal collection. 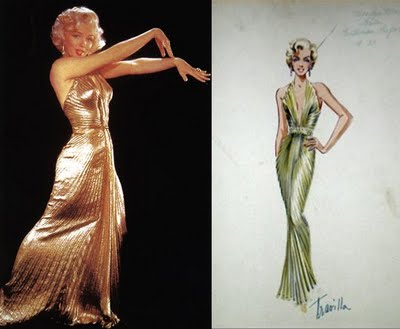 It will be interesting to see how Dressing Marilyn compares to the upcoming book,Marilyn in Fashion: The Enduring Influence of Marilyn Monroe

, by Hollywood biographer Christopher Nickens and Marilyn memorabilia collector George Zeno, and how much they focus on Travilla. Travilla was undoubtedly an extremely talented designer, and Hansford should be congratulated for trying to bring his talent to the fore. One wishes that he had just enlisted the help of a more experienced biographer or historian and taken the time to interview others who could have shed more insight on this interesting and fruitful collaboration.

You can read more of my pop culture reviews on my blog, xoxoxo e