faintingviolet’s #CBR4 review #25 The Next Always by Nora Roberts 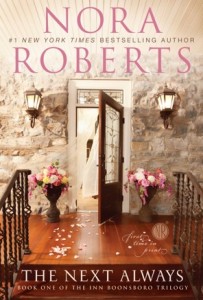 I thought that I had read enough Nora Roberts for awhile and could move on to other things. Like laundry, doing my actual job, and a foray into capital ‘L’ literature. I was wrong, but I’m not sorry.

Nora Robert’s The Next Always is book one in the Inn Boonsboro Trilogy (really, who can avoid a trilogy?) and chronicles both the romantic life of Beckett Montgomery. Beckett is one of three brothers who together are Montgomery Family Contractors. They, along with their mom, have undertaken the rehab of the town’s historic hotel and we start with Beckett, because he’s the architect. The story chronicles the finishing of the remodel of what sounds like a pretty fantastic B&B as well as Beckett’s burgeoning relationship with Clare.

Clare is a young widow who has moved back home with her three sons. She is the independent sort, has her own home and her own business, a Bookstore, just down the road from the Montgomery’s Inn.  Clare married her high school sweetheart and lived the life of a military wife, but Beckett has been holding a candle for her since he was 16.

The courtship outlined in this book is by no means easy. There are Clare’s three kids, crazy schedules, the remodel, everyone’s families, a stalker, hiring an innkeeper, grief and a ghost. But it’s a fun and quick summer read. I’ll be tackling The Last Boyfriend later this summer and will be waiting patiently (ha!) for The Perfect Hope to round out the trilogy in November.

As always, this review is cross-posted.