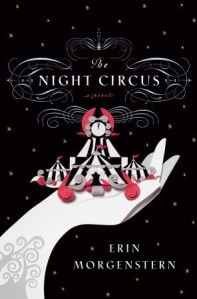 “The circus arrives without warning. No announcements precede it, no paper notices plastered on lampposts and billboards. It is simply there, when yesterday it was not.”

No opening passage in some time has been as apt as this one for mood setting. You will not be expecting this book, and for a certain type of person, you may very well be as completely enraptured by it as I was. It is a difficult book to summarize and I know it has already been reviewed a few times on this Cannonball so I’m not going to go in to it again. The following is from Amazon:

Within the black-and-white striped canvas tents is an utterly unique experience full of breathtaking amazements. It is called Le Cirque des Rêves, and it is only open at night.

But behind the scenes, a fierce competition is underway—a duel between two young magicians, Celia and Marco, who have been trained since childhood expressly for this purpose by their mercurial instructors.

This is Morgenstern’s first novel but it reads as if it was written by a pro. Her characters are vividly drawn, descriptions are beautifully evocative and the story is absolutely mesmerizing. Set during the turn of the 20th century, Le Cirque des Rêves is a place full of wonders and subtle magic. The competition is not a battle so much as a trial of endurance to keep the circus operating and all of the illusions intact. As the competition wears on the lives of the magicians, the circus performers, even the visitors are all affected by the game that they have no way to escape until a victor is declared. Neither Celia or Marco know the rules of the competition nor how the winner will be named. As they begin to fall in love with each other things start to get even more complicated.

The Night Circus is the best book I have read in years and one I would call perfect. I compare it to Stephen King’s The Eyes of the Dragon, or Neil Gaiman’s American Gods. All three books perfectly balance story, characters, language, and mood and becomes something absolutely unique.

If more people would read The Night Circus and less were wasting their time with barely literate garbage like 50 Shades of Gray than the world would be an infinitely better place.