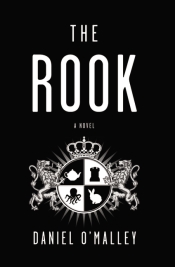 I picked this book up because of the cover, checked it out of the library because of the blurb, and stayed glued to my couch for hours because of the opening sentence (“Dear You, The body you are wearing used to be mine.”) I haven’t heard many people talking about The Rook yet, so I figure I should get things started. I loved this book. It wasn’t perfect and I wouldn’t necessarily call it a favorite, but it was unbelievably engaging and creepy, and I became rather attached to all the characters by the end of it. I kind of hope there’s not a sequel, but I’m sure there will be. Authors these days.

The Rook is the story of Myfanwy (Welsh, pronounced Miff-an-ee) Thomas, or rather, the person who is now inhabiting the body of the former Myfanwy Thomas. New-Myfanwy wakes up in a park in London with no memory of who she is, surrounded by dead people wearing rubber gloves. She finds a letter in her coat pocket addressed to “You,” and upon reading it, discovers that Former-Myfanwy had been aware she was going to lose her memory for quite some time and had made extensive preparations. The letter sends new-Myfanway to a bank and gives her a choice: pick this safety deposit box and you can leave London and live a new life, rich and free (with the possibility that someone may try to track you down in the future and kill you); pick that safety deposit box, you find out who I am and how to take over my life. New-Myfanwy chooses the latter and soon finds herself one of the leaders of a top-secret shadowy pseudo-government agency called The Checquy which trains young Britons with superpowers and keeps the world safe from paranormal threats. Oh, and also she has superpowers herself. With help from former-Myfanwy’s letters, Myfanwy must navigate her new life and somehow unravel the mystery of who is trying to have her killed, and why.

Okay, so writing it out like that makes me remember it even more fondly, and I think my opinion of the book just went up even more. I kind of want to retract my previous statement — this book might be on its way to my favorites shelf after all.

There is a shit ton of urban fantasy being written these days, and most of it is not my cup of tea — too urban, too gritty, too formulaic. But The Rook manages to avoid all those things I don’t really like, instead providing heaping spoonfuls of atmosphere (mysterious, creepy, beautiful, elegant, to abuse a few adjectives), characters that felt like real people, and genuinely frightening (and at times horribly disgusting) threats. But really it was the storytelling that got me. The main conceit of the novel — Myfanwy learning about her life through letters her former self had written — was extremely effective. I might even call it charming. It made the book feel like a story, and all the magic that implies. Something else I loved about The Rook is what it did for Myfanwy, who should be added post-haste to every list of badass female characters. I want to say more about this particular line of thought, but I’m trying to keep this review spoiler free. You’re just going to have to take my word for it and go read this book.

Plus, if all of that doesn’t sell you, one of the characters in this book is one person who happens to inhabit four different bodies at the same time. I mean, come on. How cool is that?