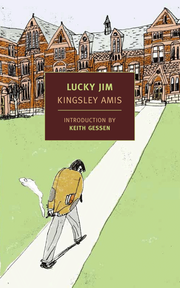 Lucky Jim by Kingsley Amis is a good choice for fans of Brit lit in the vein of P.G. Wodehouse and Jerome K. Jerome’s Three Men in a Boat. It’s witty with biting humor although it does lack some of the whimsey found in Wodehouse and Three Men. Amis’ writing has more of an edge and flirts with misanthropy, but manages not to fall head over heels into it. Protagonist Jim Dixon is a history lecturer at a provincial college. His advisor Welch is a pretentious bore, Welch’s wife is a shrew and his son Bertrand an arrogant snob with a hot girlfriend. Margaret is a single, not beautiful but  not ugly colleague and friend (perhaps more?) who seems emotionally unstable. Jim is closing the school term, trying to get published and to keep in Welch’s good graces so as to keep his position, but Jim hates them all. He is not quite a misanthrope, having kind impulses toward Margaret and good relations with a few chums. But there are fools whom he will not suffer — Welch, Bertrand, and his fellow boarder Johns, with whom he has an antagonistic combative relationship, reminiscent of “Spy vs. Spy”.

Jim seems unlucky throughout the book. At a weekend at Welch’s, he drinks too much, nearly sets fire to his room, antagonizes the host’s son and girlfriend, and offends Margaret. The editor who showed an interest in his research is getting ready to leave for a post in South America. And Jim doesn’t especially enjoy his chosen career or current post. The climax is the lecture he is to give on “Merrie England,” a chance to impress his supervisor and keep his job, but his drinking problem and desire to win the personal battle against Bertrand and Welch results in something quite different.

I think this book would be especially enjoyable to anyone who has spent time in graduate school, particularly studying history (as I did). Some of my favorite lines in the book relate to the graduate student grind. Jim became a Medievalist without really intending to and he hates his course of study. Reflecting on the title of his research (“The Economic Influence of the Developments in Shipbuilding Techniques, 1450-1485”), Jim reflects, “It was a perfect title, in that it crystallized the article’s niggling mindlessness, its funereal parade of yawn-enforcing facts, the pseudo-light it threw upon non-problems.” When a friend asks Jim if the work is any good, Jim asks what he means by “good.” The friend answers, “Well, is it any more than accurate and the sort of thing that gets turned out? Anything beyond the sort of thing that’ll help you to keep your job?” Jim replies, “Good God, no.”

Lucky Jim is loosely based on the life of Amis’ real life friend and poet Philip Larkin. I didn’t find Amis’ writing as funny/farcical as Wodehouse’s, but Jim, despite his sometimes obnoxious and childish behavior, is likable. The reader can see his inner decency when he tries to protect the feelings of female characters. His combat with Johns and Bertrand is often hilarious. Despite (or perhaps because of) circumstances, Jim is quite lucky in the end. A fun weekend read for autumn.