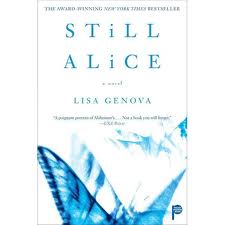 Read it! One of my friends recommended this book to me and it was a NewYork Times best seller. The main character,  Alice Howland, is a distinguished professor of linguistics at Harvard. Language and its construction are her stock in trade. She has published extensively, lectured widely and earned a reputation as a star in her field. As she is about to turn 50, Alice realizes that she is forgetting things — not just where the keys are, but where her house is, the subject of her lecture, how to make the dessert that she learned from her mother and knew by heart. Recognizing that these are not the typical symptoms of menopause, she consults a neurologist and learns she has Early Onset Alzheimers Disease.

The novel follows Alice over the next two years as the disease altars not only her mind but her relationships with her family. Her husband John, a fellow Harvard professor studying cancer, initially denies that his wife has Alzheimers, then throws himself into the research on the disease, desperately trying to save Alice. As the disease progresses, it sometimes seems as if John is distancing himself from Alice and leaving her out of important decisions. Their son (a doctor) and older daughter (lawyer) also seem to be in denial at first and are very uncomfortable acknowledging their mother’s illness. The youngest child and black sheep Lydia, who has eschewed academia for a life in theater, has had an antagonistic relationship with Alice but is the one member of the family who saw the symptoms early on and demonstrates compassion and acceptance from the start. Alice, who forever hounded Lydia about going back to school, comes to appreciate the plays her daughter performs in and her daughter’s ability to communicate without words.

Genova does an amazing job getting inside Alice’s head and showing the disintegration of Alice’s memories. It is frightening for Alice and in the early days of her diagnosis, she tries various ways to fight the disease — diet, physical exercise, daily mind exercises and ultimately creating her “butterfly file.” The butterfly file would be a great topic of conversation for a book group. In the early days, Alice still has periods of “normal” functioning and can recognize when the Alzheimers is kicking in. She tries to prepare for her future and she realizes that she will be cast out — from Harvard, her field, all the places and endeavors that formed her identity. She wishes she had cancer instead, because people with cancer are seen as courageous and get community support. People with mental issues do not. In one particularly poignant passage, Alice sits at the beach and watches the waves, a metaphor for Alzheimers: “Alice watched the tide coming in, erasing footprints, demolishing an elaborate sand castle decorated with shells, filling in a hole dug earlier that day with plastic shovels, ridding the shore of its daily history. She envied the beautiful homes behind the seawalls.”

While for the reader, watching Alice atrophy is terribly sad, Genova shows that her life is still worthwhile, not something useless or to be wished away. Alice as she declines is no longer as aware of all that she has lost and can find pleasure and happiness in the world she inhabits — a world where she no longer remembers her children’s names or that they are her children, but recognizes that they are loving people who care for her and whom she likes to be with. I sort of dreaded reading this book knowing the subject matter, but I loved it and would recommend it for its compassionate and knowledgeable portrayal of Alzheimers and its complex, human, realistic characters.