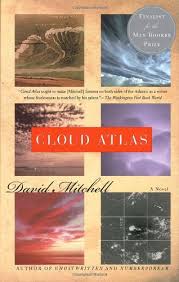 Every so often Hollywood takes a great piece of literature and makes a movie or TV show out of it. A byproduct of this is that it makes some people, like yours truly, want to go read the original text before beginning to watch. Take Game of Thrones for example. It is a runaway hit for a network I don’t get to watch, so I am resigned to watching it on disk at my own time frame. I decided to read the book first, so I went to my library, waited my turn for a copy of the super popular book to come in and started reading. I got 30 pages into Game of Thrones before I returned it to the library, bored out of my skull.

Compare this with when I read Cloud Atlas. I read a review of the movie that made the book sound very intriguing, so I got on the library wait list. When I got my copy I dove in, but only got 1/3 of the way through before I had to return it to the library. Knowing that I was going to 25th on the wait list I decided to go purchase it (from my local book store… buy local) and could not have been happier. It is a book that I am proud to own and will lend to all my friends until they have all had a chance to delve into the mastery that Mitchell shares with us.

By now you know the basic storyline, so I won’t spend too much time reviewing what happens. I will also keep this basically spoiler free, or as best as I can do. This event (I feel bad calling it mere book or story) is six individual stories nestled together. The first takes place on a 18th c sailing vessel in the South Pacific. The second is a failed composer in  post Great War Europe. The third is a hard boiled investigative journalist in sunny California in the 1970’s. Next comes the contemporary geriatrics in England. Then comes the futuristic Korean society with human clones. And finally the post apocalyptic Hawaii. Well that’s not entirely all. Each story is only HALF the story and then after the post apocalyptic tale comes the conclusion of the Korean clones, the aged Brits, the muckraking Californian, the broken down composer and then the story ends with the salvation of the sailor.

Mitchell himself wrote, as the composer describing his latest piece:

Spent the fortnight gone in the music room, reworking my year’s fragments into a “sextet for overlapping soloists”: piano, clarinet, ‘cello, flute, oboe and violin, each in it’s own language of key, scale, and color. In the first set, each solo is interrupted by it’s successor, in the second each interruption is recontinued  in order. Revolutionary or gimmicky? Shan’t know until it’s finished and by then it’ll be too late, but it’s the first thing I think of when I wake, and the last I think of before I fall asleep…

Mitchell is describing not just the epic musical piece, to be called “Cloud Atlas”, but also his own story. Yes it’s a bit gimmicky, but BLAM does it ever work!!! I was thinking of it when I woke and when I went to sleep.

Each story is indeed in it’s own voice. The change in language from the High-Formal gentleman speak of the 19th century learned men to the pigeon-English of the postapocalyptic is outstanding. As each new tale began it took a bit to get used to the style of writing and the patter of speech. I found myself annoyed a number of times at the start of a new section because it wasn’t as good as the past section…until a few pages later when I didn’t want to put it down. And then I got upset when the next section began because it couldn’t hold a candle to the previous section, until it blew it away with its’ own mastery. On the descent (as I am calling the second half of each story) I ripped through them knowing how good they were. It felt like seeing an old friend again.

I’ll admit that I was skeptical on the way up. I was really enjoying the variety of language, the interesting story lines, and navigating the structural changes. There were some connections between the stories, but not really. Then on the way down, it all fell in to place. Starting with the conclusion of the Korean sci-fi I realized that Mitchell was not just talking about this story, but explaining parts of the postapocalyptic plots, as well as making direct references to themes from other stories. The next and next and next story kept opening up and opening more themes that I had not realized were there the whole time. I had to go back and check earlier sections to prove to myself that those clues were really there. (It was not unlike LOST with clues hidden way back).

I got goosebumps when I finished the second to last section when I realized what a genius Mitchell is with this book. He cleverly wove strands of what it is to be human throughout all the stories, from the savage South Pacific Islanders to the corporate CEO’s to the human fabricants in a futuristic society and back to primitive beings after the fall of civilization. What is our role here during our brief sojourn on this planet? How can the actions of one person impact those of future generations. Mitchell has one character write “A life spent shaping a world I want Jackson (his son) to inherit, not one I fear Jackson shall inherit, this strikes me as a life worth the living. ”

Not all of the sections are equal. My favorite world that he shared with us was the Korean-sci fi.The 1970’s was the most pedestrian  but it was still very interesting and captivating. On the way back down each story took turns that I did not see happening which shifted my preconceived perception of each of the plot-lines (also like LOST).

I give this book a “one of the best I have ever read” ranking. I could not put it down and really enjoyed the world he created. I have decided NOT to see the movie, my original impetus to reading the book, because I don’t want to lose his world as I see it in my mind. Read and enjoy.

READ MY ORIGINAL REVIEW HERE AND LOOK AT MY OTHER REVIEWS