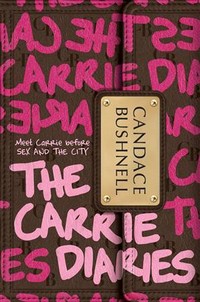 Welcome to the 1980s, Carrie Bradshaw style! If you are like me, most of what you know about Carrie came from the HBO series Sex and the City. I never read author Candace Bushnell’s column in the New York Observer, and I have never read the book Sex and the City. Even with my simple knowledge based on Sarah Jessica Parker’s portrayal of Carrie, I was smitten with the character and her hapless-in-love cohorts. Most people know that Carrie is  Candace Bushnell’s alter ego, so that meant there has to be more to the story of Carrie than just her sexual and dating adventures as a grown woman. She had to start somewhere, and The Carrie Diaries takes the reader back in time to a place where Carrie was a senior, a virgin, and a non-published writer.

I admit I am a person seemingly stuck in nostalgia for the 1980s and many times, stuck in high school. As a teacher of high school students, I have perpetually been on the verge of graduation for twenty years now. I love to read a good high school novel. It is familiar to me because I spend at least 180 days a year in that mind-set so it is comfortable and rarely changes. There is always drama. There is always gossip. There is always that hope for goals and dreams coming true, if you can just get along with the popular crowd or avoid that bully, it will all be over come graduation. I enjoy thinking that at least the characters in the books I read can finally get out of town and make something of themselves in the big city. We all know how The Carrie Diaries will end: she will move to New York. She will become a published author. She still might not be lucky in love. Two out of three ain’t bad.

Candace Bushnell takes the reader back to Carrie’s senior year. Carrie is the oldest sister in a family of three girls, with an overprotective widower for a father. Carrie has a nice little collection of friends in this book, but I felt sometimes that Bushnell didn’t completely flesh them out, instead, picking a few here and there who were pivotal in helping Carrie reach her goal of making it to New York City. If I had not gone back and looked up those character names, I would’ve never remembered them, they were that forgettable. I couldn’t forget the new boy at school, Sebastian Kydd, who is handsome, wealthy, perfect, and trouble . I guess Carrie’s taste in the wrong  type of men was established at an early age. I didn’t forget the outrageously named characters who cause lots of friction in Carrie’s life with school and Sebstatian: Donna LaDonna and Lali Kandesie. Donna is the most popular girl in school and she is loved by many suitors and feared by everyone else, except Carrie. Lali is a longtime friend of Carrie’s, but we all remember how tenuous our high school friendships were when a boy was involved.

I did enjoy learning about Carrie’s senior year in high school, and I was surprised to learn she was once a competitive swimmer. I never got that vibe from her in the TV series. I wish that Bushnell had explored the death of Carrie’s mother and how that affected her life. I almost think that Bushnell intended to write more on Carrie’s life prior to Sex and the City‘s timeline, but now the CW has the new series, The Carrie Diaries scheduled to air in 2013, so I don’t know what Bushnell intends to do with Carrie. I am interested in how this new TV series will be presented and if Carrie Bradshaw will appeal to a new generation of viewers.