“I think it’s like the Bible says. People will move around. But not find peace.” 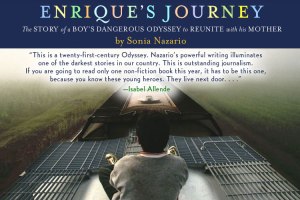 All right. This is the last book from 2012. I’m halfway done with Moby Dick and almost done with another, but those are just going to have to wait until next year. Enrique’s Journey (2006) by Sonia Nazario was a book chosen for the “Denver Reads” program. The program chooses one book per year and then sponsors a bunch of discussions and lectures surrounding it.  I’m a little behind in finally picking it up, but I’m glad I read it. In the past, this reading program has generally leaned towards fiction, but Enrique’s Journey is non-fiction, the true story of his life and thousands of other migrants.

Enrique is a 17-year-old boy from Honduras who decides to find his mother in the U.S., twelve years after she left him with relatives, in order to find work. Like thousands of other children left without one or both parents, Enrique takes the only path available to him up North. He jumps on the trains, traveling thousands of miles through incredibly treacherous obstacles in order to be reunited with his mom. My only previous knowledge of this large migration of kids came from the fascinating and disturbing documentary film, Which Way Home, which I would also highly recommend. Having seen the visuals of what actually goes on helped bring this book to life for me.

Read the rest of my review here.