Archive for the tag “Beautiful Ruins”

I was raised a fan of movies.  My dad loved movies and wanted to share all of his favorites with us whenever he could.  By the time I was 8 or 9, I had seen all of the Fred Astaire/Ginger Rogers movies, preferred Gene Kelly to pretty much any other movie actor (except maybe Harrison Ford), and could quote freely from Auntie Mame. And I still love spending a cozy night at home watching a Burt Lancaster movie or Rock Hudson comedy.

This is probably why I always am intrigued by stories of “old Hollywood” — in particular, the kind of story where fame is a dark and dangerous trait to acquire: James Ellroy’s books about 1940s LA; Whatever Happened to Baby Jane; The Sweet Smell of Success; or any number or strange and sad biographies of stars, directors, producers, and failed productions.  And there was no bigger a failure in Hollywood than Cleopatra.

When I first picked up Beautiful Ruins, I had no idea that part of it was about the filming of Cleopatra, but I had seen it on several “best of” lists at the end of Summer.  (My library had it on the “great reads for the beach” shelf, which on the day I saw it, was being packed up and replaced by “back to school” suggestions.)  It tells several interweaving stories — between World War II and the present, in Europe and the US, Idaho and Hollywood — that all come together in the end.

I don’t want to get into the plot too much, as I think it is better left as a surprise for the reader.  The story starts out in rural Italy in 1962, when an actress filming the movie Cleopatra comes to a small hotel on the coast to wait for her boyfriend so that she can tell him that she’s dying of cancer.  Chapters jump through time from 1962 to present day Hollywood, where an idealistic young producer wonders if she should stick with her job working with a Hollywood legend, or curate a film museum for the church of Scientology.  And somehow, these two stories become one.  Characters include a young Italian hotel owner, a beautiful Hollywood starlet, a failed writer, an alcoholic rock musician, a ridiculous Hollywood producer (think Robert Evans), and an entertaining and inebriated Richard Burton.

By the way, I never looked at the bookflap with the Author blurb until after I finished the book…I was completely surprised to find that Jess Walter is a man.  Weird that I assumed all along that Jess is a woman.

You can read more of my reviews on my blog. 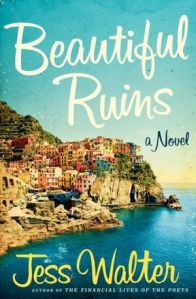 Let’s get one thing out of the way up front: Beautiful Ruins is an absolutely perfect book, and if you read any review that claims otherwise, then that reviewer is trying too hard to be a smug killjoy and they should not be trusted. You should perhaps ask them if they also enjoy popping children’s balloons and talking on their phone during movies because only a jerk would hate on this book.

In Sara-parlance: I wanted to hug this book’s face off.

If you would like to know why, head on over to Glorified Love Letters for the rest of my review.

… [T]rue quests aren’t measured in time or distance … so much as in hope. There are only two good outcomes for a quest like this, the hope of the serendipitous savant — sail for Asia and stumble on America — and the hope of scarecrows and tin men: that you find out you had the thing you sought all along.

Beautiful Ruins is a story of quests. Spanning a 50 year period starting in 1962, the characters in this novel each have a quest or dream of some sort — for fame, success, love. It is a humorous and charming novel that moves back and forth between a small Italian coastal village in 1962 and the West Coast of the US today, with special focus on the movie industry.

The action starts in a small coastal Italian fishing village called Porto Vergogna — Port of Shame. Pasquale, age 20, is trying to build up a beach so that the family hotel, the Hotel Adequate View, can become a jet setters’ vacation destination. He has big dreams to build a tennis court on a cliff, attract Americans and so on. The local fishermen think he is crazy as he piles up rocks that get washed away with the tides. Then one day, a gorgeous American starlet shows up at the hotel. Within a few short days, Pasquale’s dreams and his life undergo a dramatic shift.

In modern day LA, Claire, an assistant to a once successful movie producer named Michael Deane, is growing restless over her job and her porn-addicted boyfriend. She wants to make meaningful, important films and not the dreck that Deane produces. She is ready for a change, but should she leave her boyfriend? Should she leave her job to work for a film museum that the Scientologists are building? On a fateful “wild pitch” Friday, when friends, acquaintances and people owed favors by Michael Deane are given an audience to pitch truly outlandish film and TV ideas, Claire meets a young writer and an old Italian gentleman. Within a few short days, her dreams and life undergo a dramatic shift.

From here, Walter artfully weaves the stories together, fleshing out his characters (including actor Richard Burton, filming Cleopatra in Italy in 1962) and unfolding the events that link the first two chapters together. While much in the story is sad — separated lovers, betrayal, death — there is a generous amount of humor in the writing, such as this interchange between Pasquale and his mother:

“You should push me out into the sea and drown me like that old sick cat of yours.”

Pasquale straightened. “You said my cat ran away. While I was at university.”

She shot him a glance from the corner of her eye. “It is a saying.”

“No. It’s not a saying. There’s no such saying as that. Did you and Papa drown my cat while I was in Florence?”

And this description of Michael Deane:

The first impression one gets of Michael Deane is of a man constructed of wax, or perhaps prematurely embalmed. After all these years, it may be impossible to trace the sequence of facials, spa treatments, mud baths, cosmetic procedures, lifts and staples, collagen implants, outpatient touch-ups, tannings, Botox injections, cyst and growth removals, and stem cell injections that have caused a seventy-two-year-old man to have the face of a nine-year-old Filipino girl.

The novel ends on a bittersweet note, but I won’t tell more than that. It’s an enjoyable read and perfect for summer vacation if you are looking for a good book.