Archive for the tag “bibliophilia” 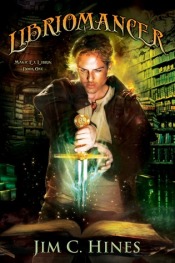 More people need to read Jim C. Hines so he can quit his day job and become a full-time writer. I want this for two reasons: 1) Because it must suck to work a full-time job and write on the side like he does (I think he actually writes on his lunch break), and his writing is good enough that I feel like he deserves it; and 2) Because I want him to write more books for me to read.

Isaac Vainio is a libriomancer, a sort of magician who can reach into books and pull things out of them, but if he’s not careful, the books can pull back. Two years before the events of the novel, Isaac was taken out of field duty for pushing himself too far with his magic. Sure, he saved a bunch of people, but he almost lost himself in the process. So he became a librarian, forbidden from using magic himself, who secretly catalogs books for the Porters, a magical organization surrounding the practice of libriomancy that was founded by Johannes Gutenberg six hundred years before. Gutenberg is still alive thanks to his own practice of magic, which is extremely powerful, and he rules over the Porters and the magical world, ostensibly to keep the borders between our world and the magic of the books from breaking down and causing chaos.

But all of that is just backstory. The book opens with Isaac being attacked by vampires in his library (these vampires in particular, Sanguinarius Meyerii, leaked out of the pages of Twilight, and Hines hilariously calls them “sparklers”) because they think the Porters are coming after them and they want information. When a dryad named Lena shows up both to rescue him, bringing bad news about a series of brutal attacks (and the murder of his mentor) by the same unknown and very powerful assailant that’s been attacking the vampires, Isaac is pulled back into the field. Vampires are about to declare war on both Porters and non-magical humans, Porters are being killed by possessed vampires, and Gutenberg is missing, along with the incredibly powerful automatons he uses to enforce his magical laws. Isaac and Lena have to find out who’s behind all of it before his magic begins to consume him once more.

This book was just an amazing amount of fun. I was a bit skeptical during the first chapter, but as the book goes along, Hines builds an impressively detailed and fun world based entirely on the premise that stories really are magic. Isaac (and by extension Hines) knows books backwards and forwards, and he uses his love like a weapon. In fact, Hines’ love of the written word permeates the whole novel. More importantly, his characters are fun to hang around with, and they are (thank God) incredibly non-annoying. I’m not usually into urban fantasy, but there are several authors whose imagination overcomes whatever it is I find so unappealing about the genre (I honestly have no idea why it turns me off so much). Jim C. Hines is one of them. By the end of the book, I was physically incapable of putting it down.

So often in these types of books (you know, the ones were the heroes have to push themselves to the brink because an unimaginable danger is threatening to destroy them and they only have days to save the world — which describes most urban fantasy that I’ve read, actually, so maybe this is the problem that I have with it), the ending is rushed and confusing. But the ending to Libriomancer was darn close to perfect*. It was surprising, and yet as it was happening I could see very clearly how Hines had elegantly built up to it. Hines’ description made the chaotic magical denouement that so happens in these types of situations very clear, even exciting, and he does this thing with the automatons that just made me squeal with glee. Also, did I mention that Isaac owns a fire spider named Smudge who is awesome?

*The only thing about the ending that made me feel weird was how the relationship between Lena and Isaac was resolved, but I don’t want to say anymore as it’s a huge spoiler. I’m just going to say that it kind of freaked me out and leave it at that.

Anyways, this was a super fun way to spend three hours on a Saturday morning. Definitely recommend it to all you yahoos.