Archive for the tag “bill willingham”

Here’s the thing…I actually reread all of Fables this year, but haven’t reviewed any of them and I don’t have a good reason, really, other than I read them all REALLY QUICKLY, so when it came time to review them, I couldn’t remember what exactly happened in each book and so I just decided not to review any of them. (Also, laziness.)

But! I did just read Werewolves of the Heartland, which is Fables but not like FABLES Fables. It’s a special edition or something, so I don’t feel like I have to address any kind of continuity from the rest of the books in order to talk about it. I mean, I probably will, but I don’t feel OBLIGATED. I hate feeling obligated, especially when I’m writing about werewolves who live in Iowa.

Because that’s what Werewolves of the Heartland is about, you know. Werewolves. Who live in Iowa.

For those who don’t know, Fables is a comic about a group of fictional characters who aren’t so fictional in this universe. In this universe, fairy tale characters have escaped from The Adversary and are now living in the human world, though they call humans Mundys because humans are all mortal and non-magical and therefore are always called something like Mundys or Muggles or some other derogatory nickname and WHY CAN’T WE HAVE ANYTHING COOL WHERE IS MY MAGIC WAND.

The Fables founded Fabletown (creative, right?), a neighborhood in NYC, a long, long time ago and are all the time trying to make sure Mundys don’t find out about them, because what would you do if you found out Prince Charming was living a few blocks away? You’d probably try and marry him, right? Well, don’t, because he’s a complete cad, I tell you, A CAD.

Snow White is HBIC and basically runs Fabletown, alongside Bigby Wolf (Big Bad Wolf, get it?) and we love them. No, I won’t tell you why. I won’t tell you anything else about Fabletown or Bigby or ANYONE. Go read all of Fables and then come back and we can talk about it, OK?

Anyway. Werewolves of the Heartland finds Bigby in Iowa, looking into a small town called Story City. Bigby is captured and, seeing that he’s the original wolf of all wolves, is both feared and loved. Some residents want him dead, others want to sleep with him and have his Super!Wolf cubs, and still others just want to hang out in his front yard and be blessed by him.

Bigby gets in some trouble, obviously, because he’s Bigby, but you’re never really that worried about him because he’s pretty much the ultimate badass. He’s the only Fable we really know who makes an appearance, other than an old friend of his that’s only appeared one other time in the Fables universe (to my knowledge), but that’s more than OK because we love Bigby. WE LOVE HIM SO MUCH.

Still, this little diversion of Bigby’s was pretty boring. I’d much rather see what’s going on with the rest of the Fables so, though I do always enjoy spending time with the Bigby, this kind of seemed like a waste of time, as you can probably tell from this review, since I spent more time talking about real Fables than this Fables.

(It DID feature some werewolf boobies and weiners, though. You know, if you’re into that sort of thing.)

So, yeah. Five stars for Fables as a whole, only two stars for this installment. SORRY BIGBY.

I took a breather from this series for a few months and I’m glad I did.  I came back to one of the strongest collections in the series.  Although, I was a bit hesitant at first; they used a blurb from The Onion on the front cover.  I gave it the side eye for a few minutes trying to decide if it was sarcasm.

The Good Price revolves around Flycatcher, the former janitor of Fabletown.  Earlier in the series, Fly would not have been my first guess for the Fable that would strike the first derisive blow against The Adversary.  Fly’s innocence allows him to take up Lancelot’s old armor and descend into the Witching Well, where he reanimates all the dead fables that have been buried there.  Blue Beard and Sher Khan make a small reappearance, I would’ve loved to see more of the sudden, but inevitable betrayal.  They came off as more of sinister Laurel and Hardy then the forces of treachery and evil they used to be.

Fly manages to spill no blood as he faces many of The Adversary’s armies.  Eventually he takes away a large source of The Adversary’s power, which, combined with the special ops and sniper training Fabletown residents are getting, means war is coming.  Of course, the whole series has been a build up to war, but now it seems closer to the horizon.

I have been reading a lot, but have fallen down on the reviews. I had very specific issues to address with each volume, but that was two months ago. Consequently, I have done up a general review of all three volumes. That will teach me to wait months to do a review! (no, it won’t) 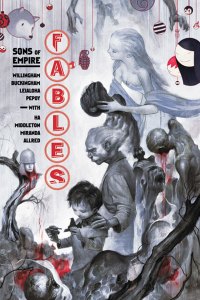 I know I’m not the only one reviewing the Fables graphic novels on CBR4, so I’m sure most people know the basic gist.  If not, here’s the quick summary.  Fairy tales are real and some of them have settled in our world when theirs was invaded by the Adversary.  The Adversary was revealed a few books ago, but I’ll try to stay away from spoiling as best I can.

This volume really just tread water.  After the exiled fables government sent Bigby Wolf back to the Homelands to strike a blow to the Adversary, after he sent the wooden soldiers into their world, the Fables in NYC are cooling their heels, while the Adversary plots end of their world.  For all the plotting, which takes up several pages, he decides against a direct invasion. I know the writers wanted to show off the power that the Adversary has backing him up, but I know enough about story telling that if you give me this long spiel about what could happen, it’s not going to really happen.  Why would you essentially retell the same story?

The one-offs were really hit or miss as well.  The one where Bigby Wolf and family go to visit Grandpa North Wind was redundant.  We all know Bigby and his father don’t get along.  Bigby threatens to kill him and we all know by now that Bigby’s bark is worse then his bite (unless you’re the Adversary or threaten his cubs).

However, the stories that dealt with other, lesser Fables were quite good.  They didn’t rehash old plots; while the story didn’t move forward, at least it didn’t move backwards.  The Christmas story was quite enjoyable.  Jack of the Tales’ attempting to hoodwink Santa Claus makes me realize how much I’ve missed Jack’s ego, his selfish ambitions and his get rich quick schemes.  Come back to Fabletown, Jack, the stories need some spicing up. 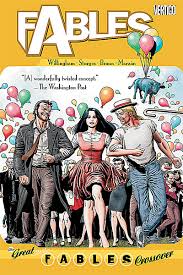 For me, The Great Fables Crossover was like watching a TV show crossover episode of a TV show you like and a TV show you’ve never heard of: it’s serviceable, and there may be some parts you enjoy, but, overall, you wish that these unknown characters would get off your screen so that your show can go back to being your show.

Dark Ages is my least favorite volume of Fables so far. I thought there were a lot of wasted opportunities in this book.

“Evil stalks the borders of Haven. Fed by fear and driven by darkness, Mister Dark has risen, more powerful than ever! Soon, the Fables’ defenses will fall, and the day of doom will be upon them. But lo, there shall come… the F-Men! Assembled by the great and powerful Ozma and the wise and wheelchair-bound Pinnocchio (don’t worry, his legs work fine – he just wants to look the part), these fabulous Fables will combine their powers to form a team-up to end all team-ups! Every super-heroic personality will be represented: Big strong guys! Guys in cool armour! Miniature people who can bounce around inside the bad guy’s ear canal! That one girl who can fly! Even a roguish, hairy anti-hero with claws: Bigby Wolf himself! Together, they will overcome their fear and defeat Mister Dark once and for all! Or maybe they’ll all die horribly within seconds. What do you think this is, a super-hero comic?”

A strong entry into a wonderful series. I absolutely love Fables and this was a relatively short but creative entry that manages to resolve some stories, prolong others and create new ones in an organic and exciting way. I finish each volume frustrated the next isn’t available yet. The central element of the ‘super team’ is very tongue in cheek, but the series ability to merge the humourous stuff with the darker, more serious stuff is one of its key strengths. This won’t be a disappointment for fans of Fables. For me, this isn’t my favourite volume (which probably has to be the ones from the climax of the Adversary storyline) but I really enjoyed it and along with the last volume, are my favourites of the Mister Dark story arc.

You can read the full review on my blog.

First Line: ‘The Ascent: In which we take a moment to see what’s been happening in the Business Office lately.’

For those of you not familiar with the Fables series, there’s a quick rundown.  All the fairytales used to live in the Homelands until the Adversary took over.  Most resettled in the real world, living in a neighborhood in NYC that is protected from “mundies”  (the non-fairytale people, i.e. us) through various enchantments.  Those fables that can’t pass for human and can’t afford transmutations costs, live on The Farm in upstate New York, probably in the Adirondack region (which I’m near, so The Farm stories are my favorites).  King Cole used to be the mayor of Fabletown, with Snow White running the show behind the scenes and Bigby Wolf (formerly The Big bad Wolf) doing the sheriffing.  Prince Charming ran against Cole in an unprecedented election and won, causing Snow White and Bigby to retire and Beauty and The Beast to take their place.  Bigby and White had a thing going on, which was more one sided on Bigby’s behalf until they had sex while under an enchantment.  White gave birth to seven kids.  As having part Wolf and part Wind heritage, the children have to be raised on The Farm, which Bigby can’t enter do to the all atrocities he committed in the Homeland.  So Bigby leaves and that pretty much catches you up to this story.

Mowgli has be sent to track down Bigby on behalf of Prince Charming.  Charming needs him on a top secret mission and has a compromise in regards to his litter.  Bigby travels back to the Homeland to bring the war to the Adversary’s doorstep.  He comes back to Charming signing over part of The Farm to him so he can live with his family finally.

Wolves has some of the best artwork of the series so far.  Fable fans also got an answer to the question of a relationship between Bigby and White.  I’ve been rooting for Bigby since day one, even though White usually seems to have a stick up her ass.  Still, it’s been my favorite volume so far; I guess I’m a sucker for the under wolf.

The Good Prince is the height of the Fables series so far.