Archive for the tag “Blake Crouch”

I’m a huge fan of Blake Crouch, but I didn’t think this was his best novel. I think it’s one of his earlier ones, so maybe that has something to do with it. Andrew Thomas is a writer who finds a strange note in his mailbox one morning. It says that there is a body buried on his property with his blood on it and if he doesn’t do what the note says, the police will be notified about the body.

Read the rest of my review in my blog.

At first, I thought maybe this was father/son writing team, but after reading the interview with the authors at the end of the book I found out that Jordan Crouch is Blake Crouch’s little brother. Interesting. I like Blake Crouch, so I figured I’d give this book a shot.

The book had a really good synopsis: It starts out with a horrible car wreck with a brother and sister and their dad. The dad is severely brain damaged and the kids are left parentless since their mother had died not to long before the accident.

Flash forward thirty years and now the little boy (Grant) is detective with the Seattle Police. He hasn’t seen his little sister, Paige, in years — ever since he tried to conduct an intervention to get her away from drugs and prostitution. One day he gets a lead on Paige’s whereabouts. She’s now a high-end prostitue in the area. Pretending to be a new client, Grant ends up at Paige’s house.

Read the rest of the review in my blog. 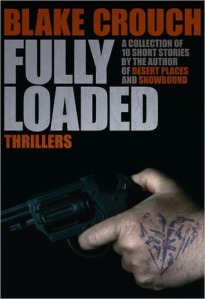 Blake Crouch is quickly becoming one of my favorite authors. His books are great thrillers and he’s always offering free/reduced price e-books (not to mention his e-books are generally less than $5 regular price). Previously, these short stories were only available separately, but now they’re offered in this short story collection.

Since there are ten separate stores in this collection, I’ll just comment on my favorite/least favorite:
-The Meteorologist was probably my least favorite. It’s not that it wasn’t any good, but it wasn’t really a thriller. It was about a guy who chases extreme weather conditions in his RV. It wasn’t even as exciting as the plot sounds. It was mostly about him and a woman he meets.
-Serial was probably my favorite. I’ve read it before (it was co-written by J.A. Konrath and was included in one of his collections) and it really plays to both Konrath’s and Crouch’s strengths. Crouch is more of a thriller writer while Konrath knows how to bring on more of the horror aspects. Serial follows what happens when two serial killers target each other. It’s an insanely good read.
Read the rest of my review in my blog!
Posted by Tara in 4 stars - a great book and tagged Blake Crouch, Cannonball Read 4, CBR4, fiction, Fully Loaded, short stories, taralovesbooks, Thriller | Leave a comment

I loved Blake Crouch’s collaborative efforts with J.A. Konrath (aka Jack Kilborn) and I’ve read a few of Konrath/Kilborn’s solo works, so when I saw that Run was free on the Kindle for a limited time I decided to pick it up. I love that these two authors independently publish these ebooks, so their books sell for around $2.99 apiece (and frequently show up for free!). It’s great marketing on their part and obviously has worked out well for them since they seem to sell a ton of ebooks. They definitely got me hooked and I keep buying more!

Read the rest of the review in my blog!