Archive for the tag “celebrities”

I’m in the middle of finals, thus my life is a little terrible. I’m reading  a lot, but it’s all about Evidence. And Intellectual Property. And the Law.

So, Spin was a light, happy stress reliever. Thirty-year old Kate is a struggling writer who pretends to be in grad school for the free wine and cheese nights, with no romantic prospects on the horizon.  When she lands her dream job interview, she shows up to the interview still drunk from a crazy night of partying. Needless to say, she doesn’t get the job.

What she does get is an offer to take an all-expenses-paid trip to rehab, where she’s expected to befriend a Lindsay Lohan-esque starlet seeking treatment there.  And then write a salacious expose. Kate goes to rehab, becomes best friends with the starlet and falls in love.  When rehab ends, Kate has to make a choice.  Her new friend, her sobriety, or her dream job?  Kate chooses a fun combination of the three.

As fun as the book was, it  touched on something more serious that I don’t think gets enough attention among twenty-somethings.  There are certain drinkings patterns that are totally normal and acceptable when you’re in college.  But when you graduate, at some point, those patterns become signs of alcoholism.  In your twenties, there’s a blurry, sensitive line between young, fun partying and alcoholism. Kate ostensibly goes to rehab for a job. But Kate is also in rehab because she needs it.  Kate never left her student lifestyle behind, and her slow realization that she might actually be an alcoholic rings very true.

Let’s break down some of the classic chick lit elements found in this novel, shall we? 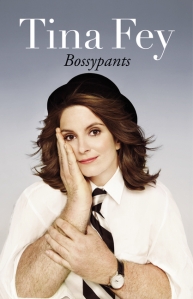 Not that I liked him all that much to begin with, but Jerry Lewis’ famous comment (paraphrased), “Women aren’t funny.”, has forever linked him in my mind with the word, “fuckwit”.  Not only CAN women be funny, in my mind they are usually funnier than men. I can name a dozen hilarious women off the top of my head, I’m having a hard time getting above 6 right now of funny men and all of those men are on NBC sitcoms. My number one criteria for dating has always been personality and with personality I mean sense of humor. This is a round about way of saying that I found Tina Fey’s Bossypants to be very, very funny and well worth taking the 3 hours it requires to read it.

Starting with her childhood and moving all the way up to 30 Rock, Fey writes about her life to this point by focusing on the high points and formative events. Her days spent in a summer theater group, her tenure at Second City and, of course, her experiences writing for Saturday Night Live and creating 30 Rock. Interspersed throughout the book are managerial lessons she has learned that are pretty good. I was surprised, not that she had advice, but that at times the book was more than funny and actually not a bad “how to succeed in business” book.

Saturday Night Live is one of my obsessions. I have read numerous books on the subject, including the amazing Live from New York by Tom Shales and Andrew Miller (seriously, it is fantastic) so it should be no surprise that the section Fey devotes to SNL, and especially the insanity of the Palin days, was my favorite. Many people in my family are Republican and I have had more than one occasion where I brought up 30 Rock only to be told “We don’t watch Tina Fey.” This anti-Fey attitude is solely because of her impression of Sarah Palin on numerous SNL skits. Then my family members would talk about how much their love Two and A Half Men (no joke) which filled me with GLEE (not the show) when Sheen had his drug fueled melt down. Where’s your wholesome Republican entertainer now, huh?! But I digress.

I bring that up because as Fey goes in to detail of the Palin hysteria and the fever pitch it reached culminating in an appearance of Palin on SNL. How that appearance came about, and the consternation that Fey and SNL producer Lorne Michaels felt trying to figure out how to make it work, is a great bit of “inside baseball” that really shines a light on that watershed moment in pop culture.

Many people have reviewed this book so I’m going to keep this short. I read the book because I like Fey anyway. The book is very funny, and the writing sounds exactly like Liz Lemon is telling the story. In essence, it is exactly what you think a funny memoir by Tina Fey would read like. Funny, self deprecating, honest, and open.