Archive for the tag “James Bond”

Personal Note: With this review I have achieved my personal goal of 26 books for the Half Cannonball completion and with a month to spare even. This is my 4th year participating in the Cannonball Read but the only one I’ve actually kept up with all the reviews. I couldn’t have achieved this feat alone and I’d like to thank Gwar, coffee, Godtopus, and myself – in that order – for helping me through. We did it, guys!

Now, on with the review! 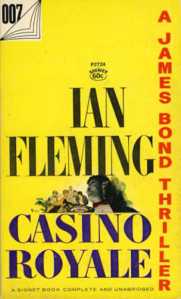 Despite being an avid fan of the James Bond movies I have never actually read any of the books the films are based on. With my anticipation for the 23rd movie, Skyfall, at a fever pitch I decided to rectify that oversight by going all the way back to the beginning. First published in 1953, Casino Royale introduced the world to everyone’s favorite chauvinist Secret Service agent James Bond. Bond has been tasked with taking down a money launderer named Le Chiffre in a high stakes game of Baccarat at the Royale-Les-Eaux in France. You see, Le Chffre has been a naughty boy and has mishandled quite a bit of money he was entrusted with by the not-at-all-nice Russian agency, SMERSH. Bond is the best Baccarat player in the British Secret Service so he gets sent to win against Le Chiffre, thus bankrupting him and forcing to SMERSH handle his demise.

To aid Bond in this mission is Mathis, an agent in the French service, Felix Leiter, an American CIA agent, and the enigmatic Vesper Lynd, another employee of Her Majesty’s Secret Service who acts as cover for Bond’s background. What follow is an interesting story that warms up as it goes along and helps set the stage for subsequent novels in the series.

What struck me the most while reading Casino Royale was how closely the 2006 movie followed the book. This is one of the very few Bond films that actually is based almost entirely the novel. Almost everything that happens in the movie from the point Bond and Vesper get to the Casino Royale all the way to the ending is the basis for the book. Even the harrowing scene of torture is taken straight from the pages. The only main difference is the ending which is much more low key than the explosive finale in the movie but still carries the same emotional weight. In fact, the novel’s final line was memorably used in the movie as well.

Casino Royale is my favorite Bond movie and the book is quite a bit of fun to read as well. While Bond is an unabashed chauvinist as well as misogynistic he still comes across as a hero. The book does a good job of setting up who Bond is and why he does what he does. Some of the hallmarks of the series are demystified right away, especially the vaunted Double O status of Bond’s code number. As he tells Vesper all it means is he has assassinated 2 targets for the Service.  While Bond can be cold and calculating, his mind is always working the angles and Fleming’s description of the man is fascinating. At one point Bond gets in to a meandering conversation with Mathis about the futility of the job and for the first time I saw Bond as a haunted man, not the super human the movies make him out to be. It’s adds an interesting dimension to the character.

I highly recommend Casino Royale to Bond fans as well as espionage thriller fans. The book is lean and quick but it grips you from the start. I look forward to reading more of the Fleming novels in the future.