Archive for the tag “Jamie White” 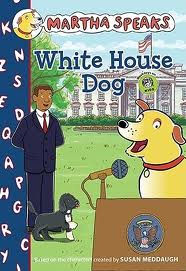 There’s a show we sometimes watch on PBS called Martha Speaks, about a dog named Martha who can talk.  One time, Martha’s owner Helen fed her a can of alphabet soup, and instead of traveling to her stomach, all 26 letters in the soup travelled to Martha’s brain.  Last Tuesday, we went to the Museum of American History, and in the gift shop, my mom got me this Martha Speaks book.

Martha sees on TV that the President is looking for a new dog. She wants to be the White House dog, but doesn’t want to live away from her family and move to Washington DC.  But, she knows the perfect dog to do it — Smudge, a little white dog with a dark black smudge on his face.  Martha calls the White House to tell them about Smudge.  Before long, all the dogs in Wagstaff City are asking Martha to help them get picked to move to the White House, and Martha makes lots of phone calls for them.  Soon, all the dogs realize that Washington is really far away, and that they probably will not get picked.

One day, Martha gets a phone call from the President, who wants Martha to come and meet with him.  The President was really glad that Martha was a talking dog.  Chessie, the White House Dog, didn’t want anything to eat or to do anything.  So Martha asked Chessie what was the matter, and Chessie explained that her squeaky toy was stuck under the floor vent.  Once the President got it out, Chessie wanted to eat and play and have fun again.  The President was impressed that Martha could tell him what animals need and asked her to go around the country and ask animals what they wanted and needed: All of them wanted more food (except for those pesky cats!).  Martha became famous and was on TV!

Chessie was really sad that Martha couldn’t stay, but Martha told the President about Smudge.  The next thing she knew, Martha was watching Smudge get adopted by the President on TV, and they lived happily ever after.  Oh, and Martha’s family was kind of mad about their HUGE phone bill.

You can read more of Bunnybean’s reviews on her mom’s blog.