Archive for the tag “Jews” 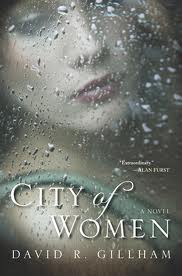 This novel is set in Berlin 1943. The tide of war has turned against the Nazis since the Battle of Stalingrad, and British nighttime bombings have resumed. The Nazis have stepped up their campaign against the Jews, rounding them up systematically and sending them to death camps in the east.

The main character, Sigrid Schroder lives in a flat with her insufferable mother-in-law and works as a stenographer while her husband Kaspar serves on the eastern front. Sigrid, like many Berliners, is detached from the political events that form daily life until a charismatic man named Egon and a young woman named Ericha present her with choices — to get involved, to care, to try to make a difference. Sigrid becomes involved in the dangerous work of hiding “U-boats” — Jews and deserters. In doing so, she encounters other ordinary women and men who use their meager resources to protect and transport these people out of the country, risking their own lives to do so. The Gestapo make it their business to hunt down people like Sigrid, but they aren’t the only danger — ordinary citizens like Sigrid’s co-workers and others who live in her apartment building could denounce her if they became suspicious, and even some members of the Jewish community have been turned into “catchers” — those who hunt down fellow Jews for the Nazis to protect themselves.

As Sigrid becomes more deeply involved in hiding Jews, her relationships with Ericha and Egon become more complicated. Ericha is a young German woman who simply hates the Nazis and will do anything required to help those in her charge. At the beginning of the novel, she is more worldly than the older Sigrid, but by the end, her youth becomes evident and Sigrid becomes more of the leader. The relationships that Sigrid has with Ericha, her mother-in-law, the women in her building, and a particular woman she is hiding, are the meat of the story for me. Due to war, Berlin is a city of women, and their relationships can be nurturing or combative.

Sigrid’s relationships with the men in her life are more troubling. Even before Kaspar left for the front, their marriage had become somewhat stale. Egon provides the passion that was missing, but the story of how Sigrid and Egon meet and become involved seems ridiculous to me, a male fantasy — two strangers hooking up in the back of a movie theater. Then there is Wolfram, the Nazi officer whose sisters live in the flat across the hall from Sigrid’s. Wolfram lost a leg in the war but not his charisma, and Sigrid becomes involved with him as well. Sigrid’s sexcapades just seemed sort of silly to me and not essential to the plot. Maybe it was supposed to demonstrate that deep down, she was always a risk-taker? Or that the author’s dream is that smart, beautiful women just can’t wait to do it with brutes who treat them like objects? As a card-carrying feminist, I veered back and forth between being aggravated by these passages and rolling my eyes at them.

The plot gets a bit complicated at the end and I felt that some details could have been clearer, but overall this was a pretty good book. Gillham did his research to get the details of life during wartime right, and Sigrid’s transformation from apathetic German trying to get through the war to a protector of the persecuted is convincing.

In Beautiful Souls: Saying No, Breaking Ranks, and Heeding the Voice of Conscience in Dark Times, Eyal Press examines four cases of individuals who, at great personal risk and cost, defied laws and/or societal norms to do what they thought was right to help and/or avoid harming others. Press wants to know why these people behaved as they did, what circumstances bring a person to take such heroic actions when others either sit by and do nothing or participate in the oppressive behavior. Are these people very different from the rest of us?

The first case is about Paul Gruninger, Commander of the State Police in St. Gallen, Switzerland in 1938. Gruninger violated the anti-immigration law to save Jews who had illegally crossed the border into Switzerland. Why? By all accounts, he was a law abiding man who had led an ordinary life and didn’t have any particular connections to the Jewish community. The difference, according to Press, was that Gruninger, unlike other police commanders, had personal contact with the refugees when they came to his office, and it is harder to cause direct harm to someone in proximity to you than when you are removed, behind a desk, enforcing rules from a distance. Press provides psychological studies and further evidence from the police in Switzerland to bolster his claim. He also suggests that Gruninger behaved as he did because of his deep belief in and support of Switzerland’s “asylum tradition.” In other words, he was not a renegade but a man who lived what he believed was the Swiss character. Sadly, most of the people around him did not live up to that ideal and Gruninger’s life after being caught was one of continual unemployment and distrust. He was not recognized for his heroic efforts until after his death.

In the second case, a Serb in Vukovar in 1991 risks his own life in order to help Croats who had been rounded up by Serbs to be imprisoned and likely executed. Today, Croats tend to avoid him because he is a Serb and his fellow Serbs view him as a traitor. Why did Aco Jevtic save those men, knowing that he would be an outcast if he survived? Before meeting the man, Press imagines a highly logical man, a philosopher whose rational brain was able to see that all men are equal and the stupidity of one ethnic group warring with another. He is quite surprised by the man he meets. After a series of interviews, Press concludes that rather than a man guided by reason, Aco is a man whose emotions have great impact on his judgments, a man who has a “sympathetic brain,” and who takes very seriously the advice that his father once gave him: to love and respect others and himself. Aco even today does not care what others think of him and he is by all accounts a happy man with a good life. For a man to be unafraid to stand apart from the herd (whether Serb or Croat) in Yugoslavia in the 1990s is impressive. Again, Press gives examples from research and other experiences in Yugoslavia to illustrate his point about the sympathetic brain and the difficulty in standing apart from the herd.

Chapter three opens with a brief reflection on Henry David Thoreau’s “On the Duty of Civil Disobedience.” For Thoreau, a man was obliged to follow his own conscience and wash his hands of wrong, not be actively involved in the wrong, but it was not his duty to try to eradicate the wrong from society. So, participating in the slave system was wrong, but Thoreau didn’t feel it was his responsibility to try to abolish slavery.  Press then moves his narrative to Israel in the 1990s. Avner Wishnitzer was born on a kibbutz in 1976 and considers himself fairly liberal. Whether liberal or conservative, Israelis have a deep respect for their military and for military service. As Avner puts it, the army was seen as a moral force, and he was proud to serve in the Sayeret Matkal, an elite commando unit. Then in 1998, he attended a lecture and film on the way Jewish settlers abused Palestinians, destroying their crops and land. Avner decided to see for himself if this were true and joined a group of Israelis who were taking blankets and supplies to the Palestinians. What he discovered was that the military was complicit in this harm committed against Palestinians, despite promises to the contrary in the Oslo Accords. The Israeli military has a tradition of the “black flag”  where military members can refuse to follow an order that is illegal. Press gives examples of this happening, and clearly, given the respect that the public has for the military, having prominent military men or large groups of them refuse and order and speak out can have an impact on government and the public. But the military also has a tradition of letting soldiers opt out of certain duties if they have conscientious objections to them. So Avner could have said that he did not want to participate in any action that would require him to refrain from protecting Palestinians or cover up the illegal acts of Jewish settlers. By the same token, more conservative members of the military could conscientiously object to removing Jewish settlers from lands being given to Palestinians. Avner and a group of elite forces soldiers decided, after much anguished consideration, that simply not participating in the wrong was not enough — they needed to do something to stop it, and so a black flag was raised. Press describes the emotional and physical toll this took on Avner and the public reaction to the black flag.

The final chapter is about corporate whistle blower Leyla Wydler. An immigrant with high regard for what she perceived as the stability and accountability of the American financial system, Leyla went to school to learn finance after suffering through divorce with two small children, unemployment and cancer. Many of her clients were also immigrants or lived abroad. They trusted her and she carefully vetted their investments. This led to trouble when she took a high profile job with the Stanford Group Co. They wanted her to cell their CDs, which she investigated and found did not actually provide the returns their reports indicated. Leyla suspected that it was a ponzi scheme. After refusing to sell the CDs and asking for reports, Leyla got fired. She tried to go through proper channels to report the agency but investigators didn’t care. Most were personally involved with the institutions they investigated. Stanford demanded that Leyla pay back her bonus, and Leyla found herself with nothing for the second time in her life. Rather than go away quietly, she continued to try to get her concerns through to investigators. Eventually, Stanford Group’s ponzi scheme became public knowledge and its CEO went to jail. During this ordeal, other brokers seemed to have no problem selling the CDs, didn’t ask questions and just enjoyed the fabulous wealth they accrued. Leyla could have just gone along like they did and become very wealthy. But as becomes evident from Press’ story, it simply was not in her character to do that. She believed in the integrity of the financial system (and was disappointed) and she took her responsibility to her clients very seriously because she could identify with their struggles.

Beautiful Souls is a well researched book. The subjects chosen are fascinating individuals, and while it is possible to identify with them, it is also possible to see how one might not be bold enough to act as they did. This would be a great book to use in a class on 20th century history or religion/morality, or just in a book club. There is a lot to discuss here.