Archive for the tag “Koushun Takami”

(cross-posted from my blog.)

09 / State of Wonder by Ann Patchett

What a trip. (Puns! Entendres!)

Ann Patchett, I have hung in there with you and generally enjoyed the ride. You write about some delightfully fucked-up people in bizarre, intense relationships. The Magician’s Assistant was kicked off by a death; Bel Canto is about hostages. Truth and Beauty follows a friendship interrupted by illness; The Patron Saint of Liars is set at a home for unwed mothers. (I haven’t read Taft, or Run. I can imagine.)

State of Wonder goes straight to the heart of darkness. Constantly contrasting the well-ordered, frozen Minnesota research lab our protagonist calls home with the steamy, hallucinogenic Amazon jungle she visits to investigate the disappearance (death?) of her friend slash research partner (slash lover???), Patchett weaves a dreamy, trippy tapestry that charms, even without a lot of plot.

Side note: this book weirdly reminded me of the Ender’s Saga books: bringing science / the study of native flora & fauna into conflict with some kind of Western morality.

In a book like this, the story isn’t the story. That is: kids running around and shooting / knifing / exploding / immolating each other isn’t the exciting part. That part’s pretty gross and kind of boring. The real story is: where are we? why are we on the island? who’s pulling the strings? In a really stellar book of this type, the slow reveal is key to the suspense and eventual payoff of the story. Unfortunately, Takami didn’t quite take me there. The reveal wasn’t revelatory enough. It was just okay.

Maybe it was the translation (good, but very mannered), or maybe it was the incredibly detailed descriptions of each close-up, brain-bashing, roped-neck, tongue-lolling death, but this was kind of a pain to get through.

Three stars for being the modern granddaddy of this genre (borrowing from The Most Dangerous Game to pass on the mantle to The Hunger Games – you’re welcome, Suzanne Collins) and for juggling 42 different main characters with surprising ease.

This was a hell of a read. Its nearly thousand pages are filled with hallucination, obsession, paranoia, abuse, and secrecy. Yet it’s a love story.

This was my second Murakami novel, after The Wind-Up Bird Chronicle, and the two blur fairly strongly together in my mind. Though this one is weirder and more ambitious, each viewpoint chapter (whether it follows Aomame, the hitgirl who may be in another dimension, or Tengo, the writer boy with a brilliant ward) seems carefully written to advance the story toward an incredibly focused point. Murakami’s light hand (or perhaps that of his translator) takes good care of the reader. The story, while brutal at times, is told gently. I like that.

I won’t say whether this ends happily or sadly, because I’m not actually sure, but I will say that it was incredibly satisfying. 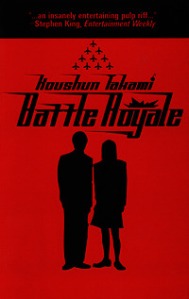 I first read this book back in college. I know now it’s getting a little more press due to the Hunger Games comparisons. I actually first picked up Hunger Games the week it was released back in 2008 because I read that it was similar toBattle Royale. They do share a lot of similarities, but enough differences to make them totally different novels.

For instance, both novels take groups of teens and pit them against each other to the death. However, The Hunger Games picks a boy and a girl from each district. Battle Royale randomly picks a ninth grade class who has no idea they were chosen until they’re already there. They pretend they’re taking them on a school trip then gas them on the bus. I think it’s a little more chilling that ALL of these students actually know each other and grew up together vs. HG’s involving mostly strangers.

Read the rest of the review in my blog.