Archive for the tag “Political Thriller”

My level of dislike for this book borders on irrational.  My first pass at the review had nothing good to say about it at all.  That wasn’t exactly fair, so here’s Version 2.  REAMDE is a fantastic idea that has been tossed into a river with the lead weights of Stephenson’s writing style, 600 extra pages and a dozen extraneous plot lines.  Now, if you happen to be irrationally fond of exposition, you might really enjoy this book.  I didn’t.

Part of this is my fault.  Stephenson and I have had a rocky relationship at best.  I slogged through the Baroque Cycle a few years ago on a friend’s recommendation, and while I didn’t hate those books, I definitely didn’t love them either.  Snow Crash was great.  And Cryptonomicon was solid too, but all of his books suffer from a similar pathology of being overwritten and heavy on the exposition.  REAMDE goes a little beyond that and ponderously drags around extraneous PoV characters, plot lines, and MacGuffins galore for no tangible payoff.

The setup is pretty clever.  A nasty virus targeting players of the MMORPG T’Rain inadvertently hits a money manager for the Russian mob, whose boss then kidnaps Zula Forthrast, niece of T’Rain’s founder, Richard Forthrast, and her hacker boyfriend to try and track down the virus makers in China.  Hijinks ensue.  The problems start coming as Stephenson adds increasingly complicated and unlikely plot twists.  The Chinese hackers have holed up underneath an Islamic terror cell, and when the bust goes bad all hell breaks loose.

Read the rest of the review… (WARNING: Light spoilers follow) 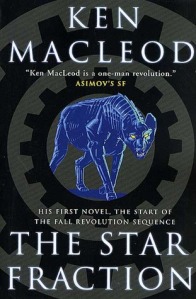 The Star Fraction is an extremely divisive novel.  Partly by design and partly by subject matter.   Any book that delves so deeply into the grit and grime of political and economic ideologies is going to be uncomfortable for some of its readers.  With that as a given, MacLeod goes and shoots himself in the foot by avoiding picking a side in the end, leaving leftists unfulfilled and members of the right just horribly angry.

The story is set in a somewhat dystopic England where a series of failed revolutions, both local and abroad, brought the might of the US/UN alliance down on the world.  As a method of compromise, the US/UN balkanized the world, allowing political dissidents and idealists to create their own communes and compounds which they could rule as they saw fit within a few constraints, such as development of specified technologies and laws regarding use of standing forces.  Moh Kohn, the book’s protagonist, is a mercenary who provides security from a verity of legal terrorist groups that operate out of the communes.  The one exception to the US/UN lockdown is the city of North London Town, or Norlonto, which exists as an independent outpost of the Space Faction, who made themselves neutral arbiters of international security in the wake of World War Three.