Archive for the tag “Salonika”

ElCicco #CBR Review #39-40: Spies of the Balkans by Alan Furst and The Invisible Bridge by Julie Orringer 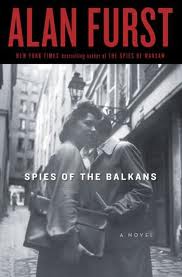 This week I kill two birds with one stone and review two novels set in WWII Europe: Spies of the Balkans by Alan Furst and The Invisible Bridge by Julie Orringer. My advice for both is “read at your own risk,” but not for the same reasons.

First — Spies of the Balkans. It promised to be an edge of your seat thriller. The setting is Salonika on the eve of the Nazi invasion. Our hero, Costa Zannis, is the handsome, 40-ish, single policeman who is very good at his job. He is devoted to his family (mother, grandmother, special needs brother) and knows his city like the back of his hand. He also has contacts amongst the seemier elements, the movers and shakers, and police types in neighboring countries, all of which will come in handy as Zannis becomes involved in helping smuggle Jews out of Europe via Greece and Constantinople.

How could I resist a story like that? How could someone make it dull and predictable?? I don’t know but Furst pulled it off. There were plenty of times that I thought to myself, “This is it! This is when the plans go awry and someone gets hurt or betrayed or disappears.” Nope. Everything turns out just fine. When the novel ends, the Nazis are just starting to bomb Salonika and there is a massive exodus from the city. And Furst could have ended his story with “And they all lived happily ever after.” It was just too easy. There wasn’t the sense of conflict and danger and loss that is necessarily a part of war, especially WWII. Moreover, there is almost nothing in this novel to set up the huge conflict that followed WWII in Greece — the Civil War. I think Alan Furst wrote this just so that he could check off “Balkans” from his list of places that he has covered in his writing. He wants it to be Casablanca, and there is a love story for Zannis, but even that is a pretty dull affair despite the fact that it’s with a married woman! Married to one of the most powerful men in Greece! Hey, no big deal though.

Bottom line — I wouldn’t waste my time with this novel. 1 star 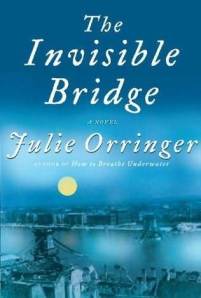 Next up — a WWII story that has everything lacking in Furst’s — Julie Orringer’s The Invisible Bridge. This novel you read at your own risk because it is so heartbreaking and tragic, although there is some happiness at the end.

The Invisible Bridge is the story of Hungarian Jews on the eve of and during WWII. It is a love story between an older woman and a younger man, and it is a story about art, dreams and hope, a story about family bonds broken and reforged. The story starts with Andras, a young architecture student, heading for Paris to study. I loved the parts about his friendships with other students at the school, and his involvement with the theater community in Paris. Paris is also where Andras becomes involved with an older woman, a ballet instructor who is also a Hungarian Jew with a mysterious past. I won’t go into detail too much because I don’t want to spoil it for anyone who wants to read it, but I will say that Orringer spent many years investigating the fate of Hungarian Jews, and it shows in her work. I learned quite a bit about how Hungary was unique in its treatment of its Jewish population, although, as you might guess, that does not mean that the Jews fared much better for it in the end. Orringer also has a personal connection to her story, since some of it is based on the story of her own grandparents.

Maybe that is the crucial difference in these two novels — personal investment. Orringer is writing about her family, her people, and when you are writing about the Holocaust, you damn sure better get it right. Furst has no personal connection to his subject that I know of, and it feels like he went through a check list of what to put in his book without really sensing a true human connection between his characters, their environment and their history.

I recommend The Invisible Bridge, even though it is terribly sad in parts. Hang on for the end. It is worth it! 5 stars