Archive for the tag “sanditon” 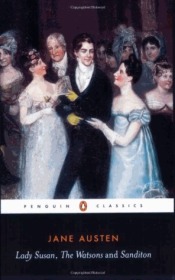 I’ve had this tiny little volume on my shelf for quite some time. I’ve been saving it, you see, because it was my last new Austen. Even though I’ve read a good chunk of the classics for both my graduate and undergraduate degrees, Jane Austen’s books remain the only classic literature that I have ever re-read for pleasure. When I read Sense & Sensibility, Pride & Prejudice, and Persuasion*, I always feel like they were written just for me. It seems monumentally unfair that we should have only six full works by Miss Austen, but wah wah, that’s a battle long over, anyway why don’t I just stop whining and write fanfic like everybody else*. BECAUSE I REFUSE THAT’S WHY. Long after her death, scholars managed to cobble together some of her unpublished writing, and the result is about 211 pages of cruelty — the three surviving fragments in this book end up being more of a tease than anything else.

*To the middle aged ladies who insist on writing dirty novels with all of Jane Austen’s characters, PLEASE STOP. FOR THE LOVE OF GOD.

Lady Susan, The Watsons, and Sanditon are all abandoned or unfinished stories that Jane Austen either never wanted published (in which case, uh, too bad?) or that she never finished (in the case of Sanditon, it was because she died, so that sucks). I wouldn’t recommend reading this book to any but the most hardcore Austen fans or scholars. Lady Susan is the only finished work in the book, and it’s from such an early period in her career that it’s almost unrecognizable as being Austen’s writing. And The Watsons and Sanditon are both unfinished.

The most notable thing about Lady Susan is that it marks a failed experiment on Austen’s part to write in the popular but annoying and much less effective epistolary style of the day. Austen’s cleverness shows through in the first person narration of the letters, but all the subtle witticisms derived from the saucy narration in her other workds are missing, and while there is some fun to be had with the unreliable voices of her characters, the style constricts her more than it helps her. Also notable about Lady Susan is that its main character is actually a villain. The titular Lady Susan is a charming and beautiful widow with high aspirations and an empty soul. While it’s fun to see Austen experimenting with her style, and fun to see her play around with an evil protagonist who ultimately gets her due, the style and story don’t ultimately suit her, which is why I’m sure she never sought to publish the thing. Alas.

The Watsons is much more classic Austen, albeit messy and unfinished. For whatever reason, good old Jane gave up on this story, but I wish she had continued with it. The heroine of The Watsons is Emma Watson (no relation), the youngest daughter of the poor Watson clan, which also includes three older sisters and a brother. Emma is raised away from her family by a wealthy and childless aunt, but when the aunt marries again, Emma is forced to move home and re-acquaint herself with her family and her drooping prospects. But of course this is Austen, so her prospects don’t droop for long. Pretty soon she’s got the rich and handsome Lord Osborne chasing after her, and she couldn’t care less, preferring his less important and rich tutor, Mr. Howard, who acts as if she doesn’t exist. The text of the thing is all over the place in that special way all first drafts have, but I think if she could have gotten over whatever was blocking her and finished it, this could have been great. I would have liked to see Austen do an anti-Cinderella story, the prince courting the peasant.

Of the three fragments, Sanditon is the most well-realized — it was the last thing Austen was working on, even as she was dying. Not coincidentally, a large part of the narrative is devoted to siblings who are hypochondriacs, and the namesake town of Sanditon is a place of healing, even if Austen is poking fun at it the whole time. Her special power of affectionate satire is in full force in Sanditon and the characters are fully formed almost from the get go.

Again, reading this collection was by no means a waste of time, but it’s more of an educational interest sort of reading. You’re not going to get any narrative satisfaction out of it (although apparently many people have tried their hands at finishing The Watsons, which might help you out with the satisfaction thing if you’re so inclined). Ultimately, reading this just made me want to re-read the good stuff all over again.