Archive for the tag “The Void Trilogy” 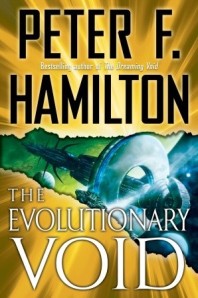 Okay, I’m not sure if I wasn’t paying attention to book two, but The Evolutionary Voiddefinitely jumped the tracks a bit and careened off into the nebulous science fantasy genre.  Not that there’s anything fundamentally wrong with science fantasy, but the effect is sort of like going to a Star Trek convention, passing out on the last day and waking up to the cosplay contest of an anime con.  Not unpleasant per se, but definitely disconcerting.

Where book two, The Temporal Void, was mostly about the events within the Void, and by extension Edeard’s story, book three takes us back outside to resolve the ongoing problem of the Living Dream pilgrimage.  The majority of the narrative is spent picking up plot threads from the first book that were left withering to make room for the copious number of dream chapters in book two.  I should note that I started Evolutionary Void almost two full years after reading the first two books, and spent a substantial amount of time trying to remember who the hell everyone was with mixed success.  Most of the protagonist groups have finally aligned against the forces of the Living Dream or the Accelerator Faction, but haven’t necessarily teamed up.  All that aligning means less in the way of Ludlum-esque chases and more pseudo-scientific technobabble along with a fair portion of posthumanist philosophy.