Archive for the tag “The Wind Through the Keyhole”

Siege’s #CBR4 #43: The Wind Through the Keyhole by Stephen King

In which Siege remembers just why she began to love Stephen King in the first place.

Posted by Siege in 5 stars - a favorite and tagged Fantasy, fiction, Siege, Stephen King, The Wind Through the Keyhole | Leave a comment

Scootsa1000’s #CBR4 Review 46: The Wind Through the Keyhole by Stephen King 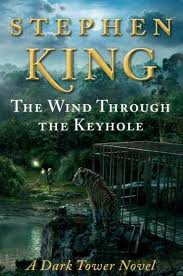 When I first took on the challenge of last year’s CBR3, I decided that I’d attempt to re-read the massive Dark Tower series.  I finished the first three books in no time at all…and then, well, there was the fourth book.

The fourth book took me so long to finish, that while I was reading it, Stephen King went ahead and wrote a brand new Dark Tower book.  Supposedly, this new book would fit nicely between Wizard and Glass and The Wolves of the Calla.  And while I was eager to get back to the story of Eddie and Jake and the path of the beam (and Oy!), I decided to give the new book a quick read and see how it fits into the DT universe.

The Wind Through the Keyhole is actually three stories in one.  In the first, Roland and his ka-tet have just left the emerald palace where they find themselves at the end of Wizard and Glass.  They come to a huge river that they need to cross, and meet a lovely older man who has a ferry, and is happy to take them across.  And then he warns them about the coming storm…a “starkblast” and tells them to take shelter sooner than later.  Roland and friends find shelter just in time — the wind starts whipping and freezing, killing everything in its path.  As they wait out the storm, Roland tells them another story from his past…

Roland tells them of an adventure he had (not long after the affair of Susan Delgado), where he and his fellow gunslinger Jaime were sent to a nearby town to look into the mystery of what has been killing and terrorizing the locals.  Some report they had seen a bear, and some say a wolf.  Roland’s been told that perhaps it is a “skin man” — a cursed man that can shift shapes at ease.  When the skin man kills dozens at a local ranch, Roland and Jaime find the lone survivor, a young boy who is scared to death.  While waiting for a posse to round up some suspects, Roland tells young Bill his favorite story from when he was Bill’s age: The Wind Through the Keyhole.

This is a fairy tale, a story of a young boy named Tim who has lost his father and is suffering at the hands of his cruel stepfather, and who risks everything to save his mother.  Fans of Stephen King will see many details connecting this simple, yet pleasant tale, to the world of the Dark Tower…North Central Positronics, nineteen, gunslingers, dogans, and our old friend Randall Flagg.  Tim journeys through a dangerous land to find the famous Maerlyn the magician, looking for help for his mother.  He also finds himself stuck in a starkblast, along with a tiger and a bit of magic. And Tim himself grows up to become a brave gunslinger, the stuff of legends.

Not the most exciting Stephen King book out there, but a nice bit of storytelling, and it fits nicely between books four and five of the Dark Tower series.

Posted by scootsa1000 in 3 stars - a good book and tagged CBR4, Scootsa1000, Stephen King, The Dark Tower, The Wind Through the Keyhole